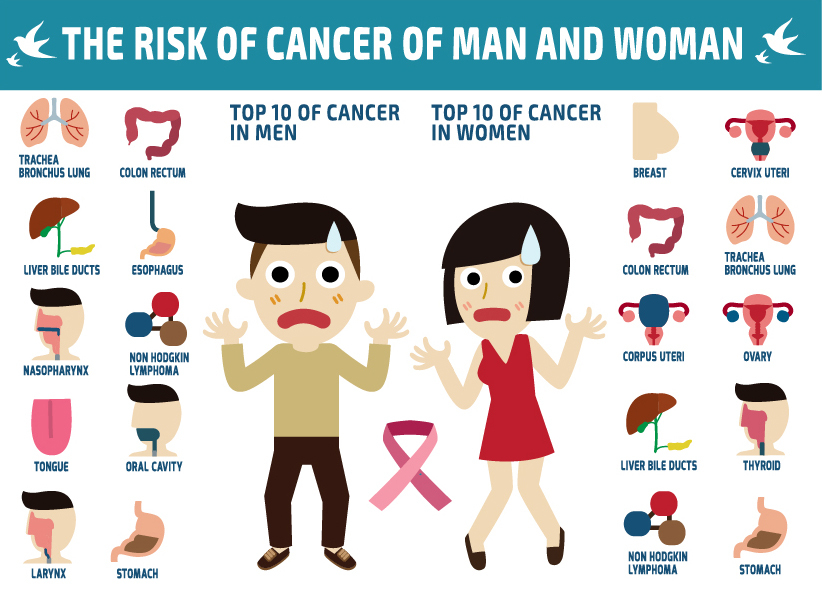 Globally, the second leading cause of death, Cancer has claimed approximately 9.6 million lives in 2018 alone. With its insatiable appetite, it will continue to consume many lives and wrecking families across the planet in the coming years. Even though the research scientists are aggressively looking out for a cure for this monstrous disease, taming this beast is unforeseeable in the near future. Although every one of you must have heard of someone fighting it, and it has continued to instil fear, not many understand much about the disease. So let’s throw some light on what cancer is? What causes Cancer? Cancer Symptoms & Cancer Treatments.

“Cancer”, is an umbrella term is given to a collection of related diseases, characterised by the formation of abnormal cells.

A human body consists of an estimated 37.2 trillion cells. In a healthy adult, around 242 billion cells are produced every day replacing the old ones, which die as a part of a natural process. Each cell follows the cell cycle, thus maintaining the internal balance which keeps us healthy. Cancer strikes when due to some unusual gene mutations, this orderly process is altered. As a consequence, the cells stop following the instructions of genes. It starts to grow and divide uncontrollably instead of dying when it should.

Cancer cells continue to grow because they behave differently than normal cells. In the majority of cases, these cells form a mass called a tumour in the body.

Now, this tumour can be of two types:

A cancerous tumour is malignant, meaning it can grow faster and spread to other parts of the body.

A benign tumour, on the other hand, can grow but will not spread and so it can’t cause harm to the body.

Identifying the stages of cancer can help determine how dangerous it is, how much it has spread and what are the treatment options. The cancer stage can be identified only after an extensive physical examination and can act as a guidepost for doctors to decide what treatment will work best.

The patient does not have cancer but has abnormal cells growing in the body which have the potential to spread.

A cancer mass is formed but is relatively small and even though it may have affected the nearby tissues, but it still hasn’t grown deeply.

These two stages of cancer indicate that cancer has spread deeply to the lymph nodes and the nearby tissues.

This is the advanced stage and identifies that cancer has spread to other organs of the body.

Determining the cancer stage is crucial

It is of utmost importance to identifying the stage as it describes the location of the cancer cells and the extent to which it has spread and whether it is affecting other parts of the body. Among other reasons, examining cancer and identifying the stage helps the doctor establish a common way to describe the patients about the state of their disease. The other reasons include:

Plan the course of treatment

With research, time and effort, cancer treatments have evolved in the past few years. The main forms of treatments available include surgery, radiotherapy, chemotherapy and hormone therapy. According to the location of the tumour and the stage of cancer, personalised cancer treatment is provided to the patient.

If you are looking to raise funds for children suffering with cancer you can read the article Cancer Crowdfunding – 5 Ways to Raise Money for Kids with Cancer .

The first question that arises after the diagnosis of any disease is the prognosis- to understand how aggressive the cancer is, how difficult it would be to fight the disease and what will be the possible outcomes, how gargantuan is the toll one particular form of cancer has on the affected population. Cancer survival rates or survival statistics ascertain the percentage of people who survive a certain type of cancer and help to discern the chances of recovery.

The situation of every cancer patient is different and this is the reason why their symptoms can highly differ as well. If you or any of your family member, friend, colleague or known associate is diagnosed with cancer and unable to sustain the expensive medical bills and treatment costs, visit Ketto Online Crowdfunding and start a cancer crowdfunding campaign.