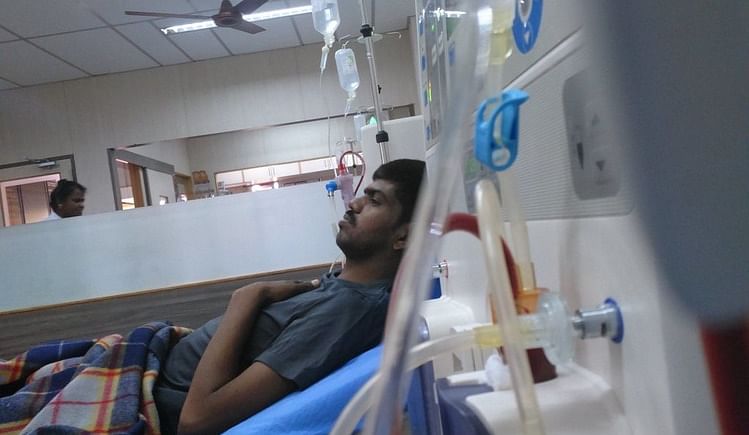 Medical situations are very stressful emotionally as well as financially with bills piling up every day. You have to pay for the treatment, medicines, scans and let's not forget the every day hospital charges! At this moment, you need as much as monetary support as you can get. Suren’s story shows us why asking your social circles of friends and family for help is the most rewarding.

Meet Suren:
Suren is a young music composer who spends most of his day in his studio strumming away till he’s satisfied with what he has created. One day, he took a break from jamming and decided to visit his school in Andhra Pradesh, Rishi Valley and came across a shocking piece of news.

Chitti Babu’s condition:
Chitti Babu, one of Suren’s school friends was going through a chronic kidney failure. Hailing from a village, he wasn’t financially prepared for this medical mishap. His brother was a lab assistant who didn’t make enough to support the operation worth Rs. 12,00,000. Chitti Babu’s father had died of the same cause – kidney failure. Suren decided to help Chitti Babu in his struggle for funds, both for the operation and the kidney eventually.

How Suren went about it:
Suren knew online crowdfunding was used to raise money for different ideas but he wasn’t sure if health issues can get help as well. He looked up on the internet and decided to go ahead with Ketto. He got in touch with the team and on their guidance took a day out to spread the word among batch mates and students of Rishi Valley so the fundraiser reaches all its potential supporters. Along with his friend Mariam, he decided to take charge and send messages to the entire school group.

Suren’s experience:
Suren decided to keep the fundraiser duration of 4 weeks but he was pleasantly surprised by his fundraiser getting most of the goal amount in a matter of just 24 hours!

For the first 6 hours, he noticed there wasn’t much activity; he decided to make the first donation and shared it. And that got donations pouring in with a lot of support from his strong network from Rishi Valley.

Thanks to Suren’s initiative, together they raised more than what they had aimed for - an amount of Rs.14,28,350. Chitti Babu has all the funds he needs to get a kidney transplant once a suitable donor is avaialble.

“Crowdfunding is the reason why we saw such a huge impact. I'm certain I wouldn’t have received such a response had I gone ahead with it personally. As an amateur campaigner, I found Ketto extremely transparent, quick and helpful with respect to its team and updates.”

If you come across a cause that requires funds, remember, the crowd has tremendous power and is always listening . Test it yourself!